Three Industries Where Technology Is Reducing Our Carbon Footprint

The science is in. We need to significantly reduce our carbon emissions to limit the amount of warming our planet undergoes as a consequence of climate change.

The good news is that technology is rising up to meet this challenge. The bad news is it needs to do far more and to do it faster. How is technology helping? Well, if we check out some of the industries with the highest carbon footprint (energy, transportation, and agriculture), we can see some of the massive disruptions that are happening there and how they are impacting emissions.

The energy sector is undergoing a massive transition globally from a system powered by centralized, thermal generation, often based on fossil fuel combustion, to one increasingly powered by decentralized, renewable sources. And while it would be great if this was happening because of climate concern, it is, in fact, happening for economics reasons, which is better because it means it is sustainable in the long term.

Don’t take my word for it. At the Wolfe Research 2019 Power & Gas Leader’s conference in October, Jim Robo, chairman, and CEO of NextEra Energy, the biggest and most successful utility in the US, said:

“We see renewables plus battery storage without incentives being cheaper than natural gas, and cheaper than existing coal and existing nuclear… And that is game-changing.”

Then, when you consider the amount of time it takes to deploy a power plant, renewables win again. 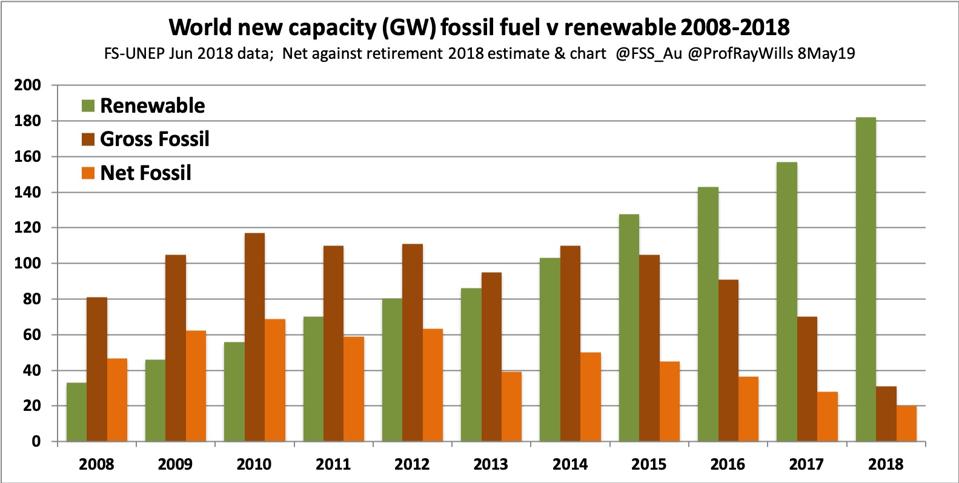 And it is not just the supply side of the equation that is changing. The demand side is changing rapidly, as well.

More and more organizations are demanding that their energy provider only supply clean, renewably sourced electricity. In fact, RE100, “a global corporate leadership initiative bringing together influential businesses committed to 100% renewable electricity,” counts 212 of the world’s largest companies (including my own employer, SAP) as members. All 212 companies are either sourcing all their electricity from renewable sources or have committed to doing so in the near future. Companies do this because it is good for business. Consumers feel better about purchasing goods if they know they were produced using renewable energy, and employees feel better about working for organizations committed to renewable energy.

So the carbon intensity of electricity, one of the main carbon polluters, is falling worldwide on a gCO2/kWh basis. What about one of the other big polluters I mentioned at the start, transportation? Well, it’s fortunate that electric grids the world over are embracing renewable energy, because transportation is starting to use electricity as a fuel instead of dino-juice!

Greta Thunberg has done an amazing job of raising awareness in younger generations about the dangers of climate change, but even before she burst on the scene, the 2019 regulations governing NEVs in China and the 2020 emissions regulations for vehicle manufacturers in the EU (as well as local ordinances by cities restricting access to older, more polluting vehicles and countries phasing out the sale of internal combustion engine, or ICE, vehicles) meant that vehicle manufacturers have had no option but to get on board with the electrification of cars and other modes of transport.

At a time when global vehicle sales are falling, sales of EVs are taking off.

Volkswagen, which has had some ahem reputational issues recently, has decided to embrace the Winston Churchill mantra of never letting a crisis go to waste and is going all-in on EVs. It plans to spend €60 billion (yes billion with a “b”) by 2024 to switch to electric, hybrid, and connected vehicles. It will introduce up to 75 all-electric models and around 60 hybrid vehicles and plans to sell 26 million all-electric vehicles as well as around 6 million hybrid vehicles by 2029.

Perhaps even more tellingly, Daimler recently announced that it is stopping its ICE development initiatives and focusing instead on electric vehicles. The reason this announcement is so game-changing is that Daimler owns Mercedes Benz and Karl Benz, the founder of Mercedes Benz, received the patent for the world’s first production ICE vehicle in 1886. Now, 133 years later, Daimler has decided that the era of the ICE is over, and EVs are the future.

And it is not just cars; motorbikes are also going electric with announcements about electric bikes from all the major manufacturers, including Vespa, Yamaha, Honda, and all the way up to Harley Davidson.

Buses, trucks (from the large class 8 all the way down to delivery trucks) and refuse collection vehicles are also going electric. This is important not just for reducing their carbon emissions, but also because these vehicles often work primarily in urban centers, so converting them from diesel to electric will improve air quality, reduce noise pollution, and significantly reduce the cost of operation for these machines.

Also, when you take into account fuel use by categories of vehicle, you can see from the chart above that class 8 trucks, buses, and refuse collection vehicles consume far more fuel than other vehicle categories. Fuel use is, of course, not just a good proxy for their potential to pollute but also for their running costs, so the economic case to shift these to electric is very strong. In the case of buses, battery-electric buses cost 20c per mile to operate over their lifetime, whereas diesel buses cost 75c, so battery-electric buses will dominate the market by the late 2020s.

“easyJet is collaborating with US company Wright Electric to support their goal for short-haul flights to be operated by all-electric planes within 10 years.”

It is hard to think of a mode of transportation that is not moving towards electric drivetrains. And as we saw in the energy sector, as our grids get cleaner daily, shifting transportation to electricity quickly drops transportation’s carbon footprint, too (as well as reducing noise pollution and cleaning up air quality).

Food production is the third industry where technology is about to play a huge part in reducing our carbon footprint. Agriculture globally accounts for about 13% of total global emissions. That makes the agricultural sector the world’s second-largest emitter, after the energy sector. And this doesn’t include emissions associated with deforestation to clear land for more agriculture.

However, shifting away from our current practices of food production to one where our plant food is grown in massive indoor vertical farms has the potential to significantly clean up agriculture’s environmental toll.

Indoor vertical farms use 95% less water and 99% less land than conventional farming practices. They use no soil, require no herbicides or pesticides, and can produce food in the middle of cities, thereby drastically reducing the crop’s food miles. When you are producing food so close to the point of consumption, you no longer need to optimize your produce for shelf-life, and you can instead choose to optimize for taste and/or nutrition.

Then there is the clean meat movement. Clean meat is meat that is produced from either cultivating animal cells (without having to slaughter the animal) or by converting plant protein to take on the taste and consistency of animal protein, as companies such as Beyond Meat and Impossible Foods are doing so successfully.

Our current means of producing plant food and meats are vastly inefficient and have a huge carbon footprint. This won’t scale to feed the population of 9-10 billion human inhabitants that Earth is projected to reach in the coming decades, especially as the middle classes grow in the developing world and their meat consumption expectations grow, too.

Converting to a system where we produce plants in massive vertical farms, and then using that plant food to create clean meat, solves a lot of the problems associated with agriculture today, such as the unconscionable cruelty we visit on the animals we breed for slaughter, the vast amounts of antibiotics that are used in agriculture leading to the development of multi-drug resistant superbugs, and agriculture’s massive carbon footprint.

If we return the land we have stolen from nature for agriculture back to the wild, we can restore the enormous losses we have seen in recent decades in biodiversity, create a huge new ecotourism industry, and, through reforestation, sequester from the atmosphere much of the carbon we have emitted in the last century, mitigating the possibility of turning back to the worst effects of climate change.

As the United Nations COP25 Climate Change Conference kicks off in Madrid, it is important to remember that, although the situation with the climate is indeed dire, there are solutions. We just need to embrace them. Quickly.

Learn how using SAP solutions turns sustainability plans into concrete actions that benefit workers, communities, the environment, and people throughout the world.

The Digitalist Magazine is your online destination for everything you need to know to lead your enterprise’s digital transformation.

Read the Digitalist Magazine and get the latest insights about the digital economy that you can capitalize on today.

Tom Raftery is Vice President and Global Evangelist for the Internet of Things at SAP. Previously, Tom worked as an independent analyst focusing on the Internet of Things, energy, and clean technology. Tom has a very strong background in social media, is the former co-founder of a software firm, and is co-founder and director of hyper energy-efficient data center Cork Internet eXchange. More recently, Tom worked as an industry analyst for RedMonk, leading the GreenMonk practice for seven years.

You can verify this in the settings.

Strictly Necessary Cookie should be enabled at all times so that we can save your preferences for cookie settings.

If you disable this cookie, we will not be able to save your preferences. This means that every time you visit this website you will need to enable or disable cookies again.